The beef is braised in a rich savory broth with potatoes and carrots until super tender and flavorful. This Chinese beef stew is an easy make-ahead recipe that requires little prep and you’ll have delicious dinners for the next couple of days. Freezer and meal-prep friendly. {Gluten-Free adaptable} 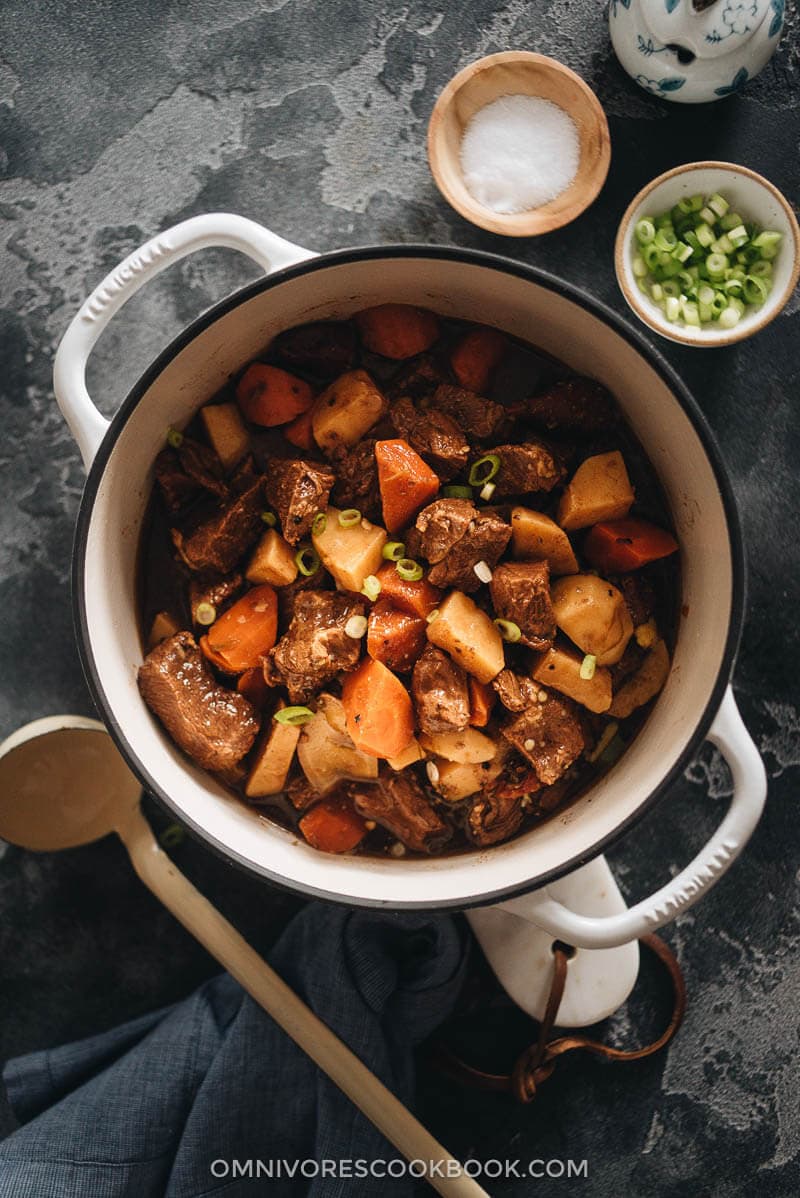 I often receive emails from readers about how challenging it is to make several Chinese dishes at the same time and serve a full meal. As you might already know, Chinese recipes tend to have long ingredient lists. Plus the recipes might require more hands-on time than many Western dishes. To tell you the truth, even my mom, who has been cooking Chinese food for the family for over 30 years, still faces the same challenge.

Her solution? Avoid cooking multiple things at a time.

It’s a piece of wisdom she’s repeated again and again since the first time I left home to study in Japan. She kept reminding me to make some braised meat on the weekend and freeze it in single portions, so I have a main dish to last me a week. So every day I just needed to make a vegetable dish. It’s so much easier than trying to whip up a new meat dish every day.

That was nearly 15 years ago when the concept of meal prep was not yet a thing. But it’s the same idea that I’ve been using all these years. 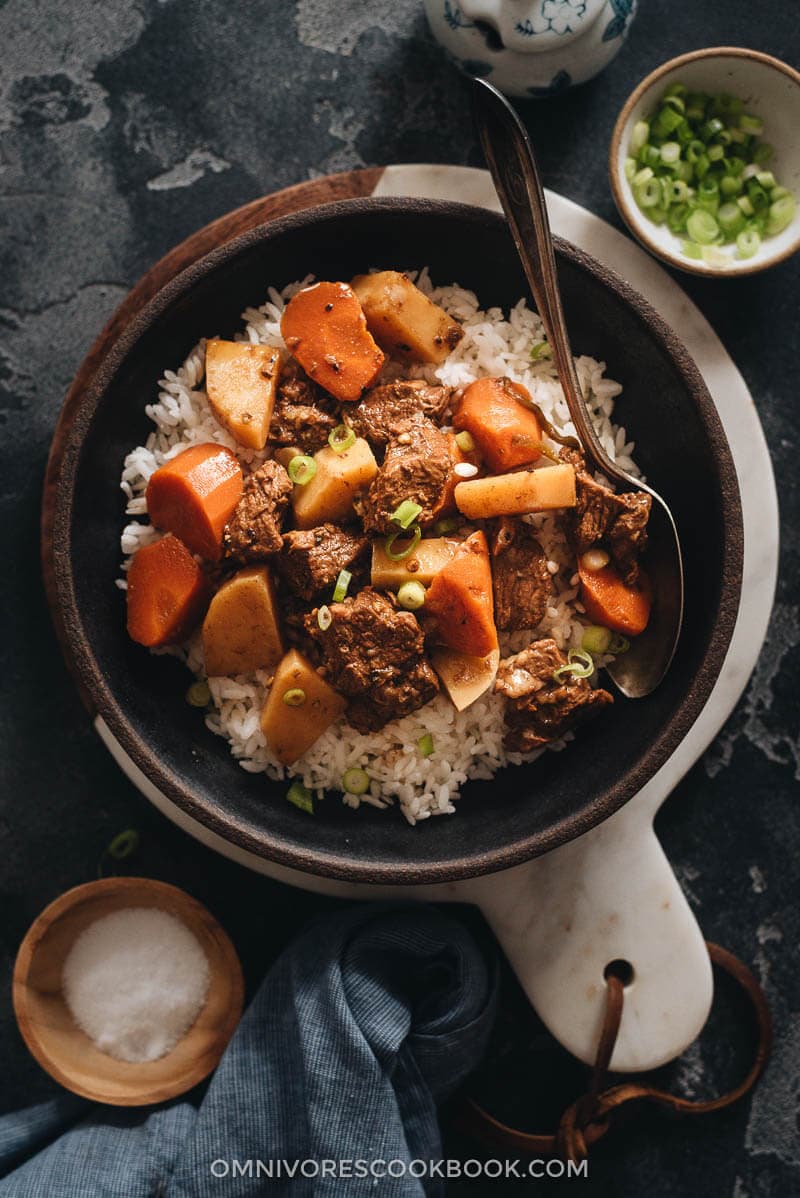 Beef chuck roast is my favorite cut to use in beef stew. The cut is usually very affordable and it yields a tender texture. Compared to the traditional Chinese beef stew, chuck roast has a much lower fat percentage. But over the years I’ve found that lots of my American friends prefer leaner meats. Plus it makes for a lighter, healthier stew. I’ve been using this cut since moving here.

Back in China, fattier stews are more popular. My mom usually uses a very fatty cut of beef brisket without trimming the fat from it. What happens is, the fat protects the lean part from overheating yet melts away during the cooking. So you get buttery melt-in-your-mouth meat in the end. If you want a fattier beef stew, try to find a very marbled cut of brisket or short ribs. In this case, you also need to braise the beef longer to get the beef tender.

My mom never browns the meat before braising it. The only thing she does is boil the meat once and discard the boiling water with all the brown bits. The reason she discards the broth is to get rid of the unpleasant smell of the meat. Back in China, meat is stored and sold at room temperature at the market. Sometimes it might not be in the freshest condition when you buy it.

I found that meat in the US is much fresher. That’s why I used the same approach in this recipe. But instead of discarding the boiling water, I skimmed and discarded the brown bits and saved the broth.

One thing I learned from culinary school is, the only thing you really need to boil is pasta. You should never actually “boil” anything else, but use lower temperatures to cook them in water.

When it comes to braising meat, it’s important to control the heat and not bring the broth to a full boil, which tightens the meat and makes it tougher. During the beginning stage, you do need to bring the broth to a gentle boil so it clots the blood from the meat and you can get rid of the brown bits. Once that’s done, you should always keep the broth at a low simmer. This means that tiny bubbles rise to the surface of the broth here and there. The simmer will keep the beef tender. It also prevents the fat from emulsifying into the broth, which produces a clear sauce in the end. 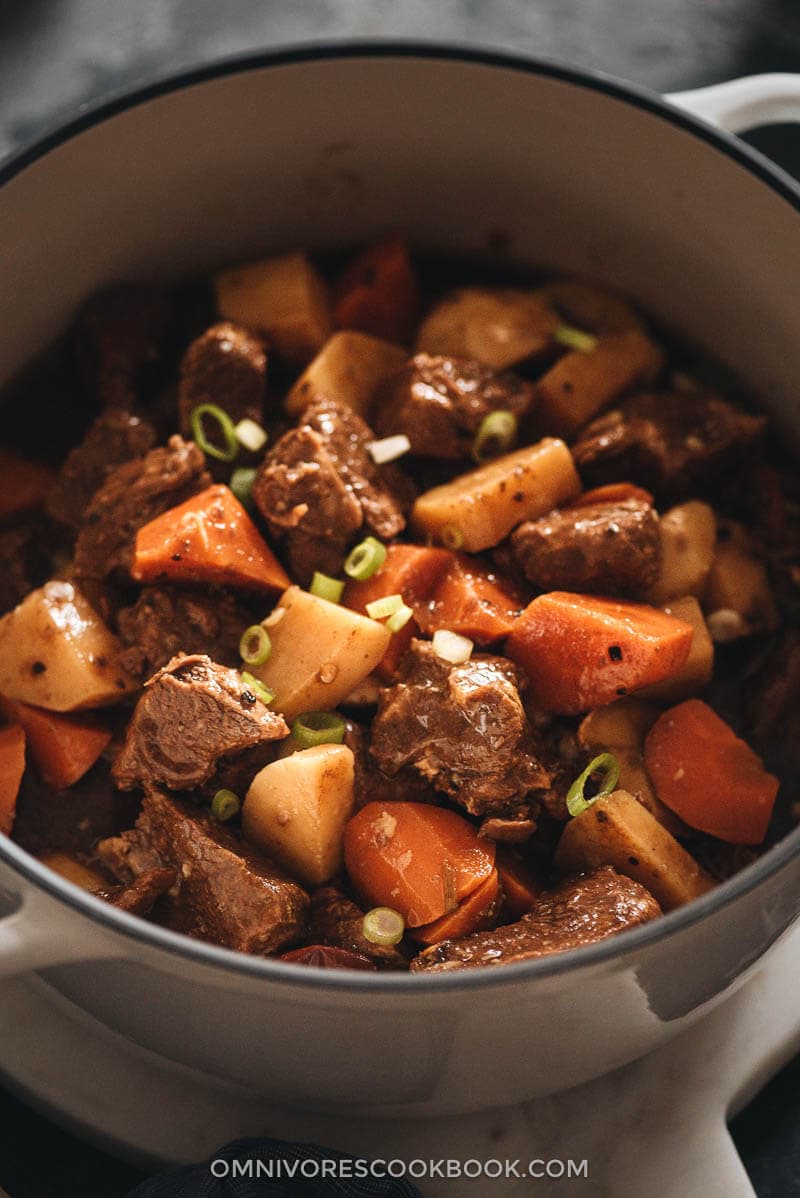 There are a few different approaches when it comes to sauce reduction.

You can use whichever way you prefer. For me, I simply enjoy the thin sauce generated from the recipe because I often use the leftover sauce to make braised veggies.

The leftover sauce has a delicious flavor of concentrated beef and seasonings, which makes a great base for cooking veggies. What I often do is:

(1) Reheat the meat and sauce in a small pan. Add more veggies (such as frozen green beans etc) and cook them together. It’s just my way of adding veggies to my meals. Believe it or not, sometimes I enjoy the flavorful veggies more than the beef.

(2) Add a spoonful of leftover sauce when making a veggie stir-fry. It’s a quick way to cook and season the veggies. 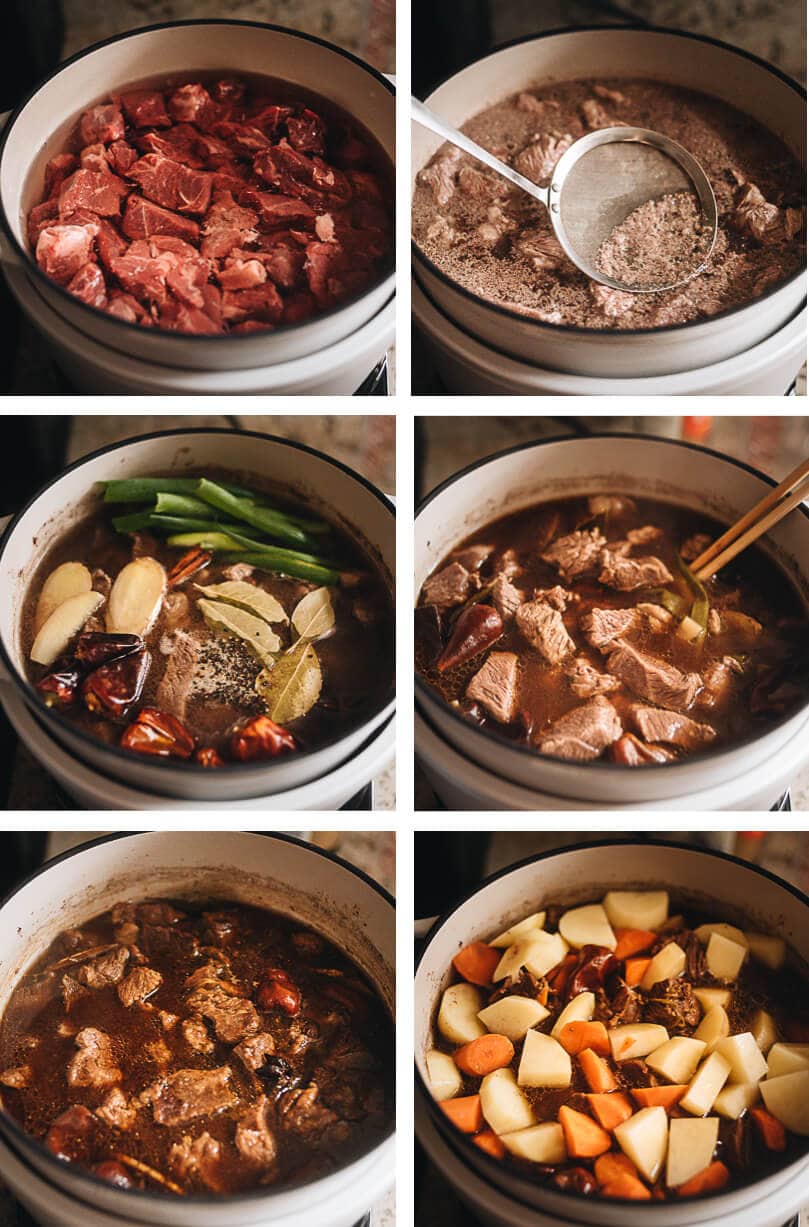 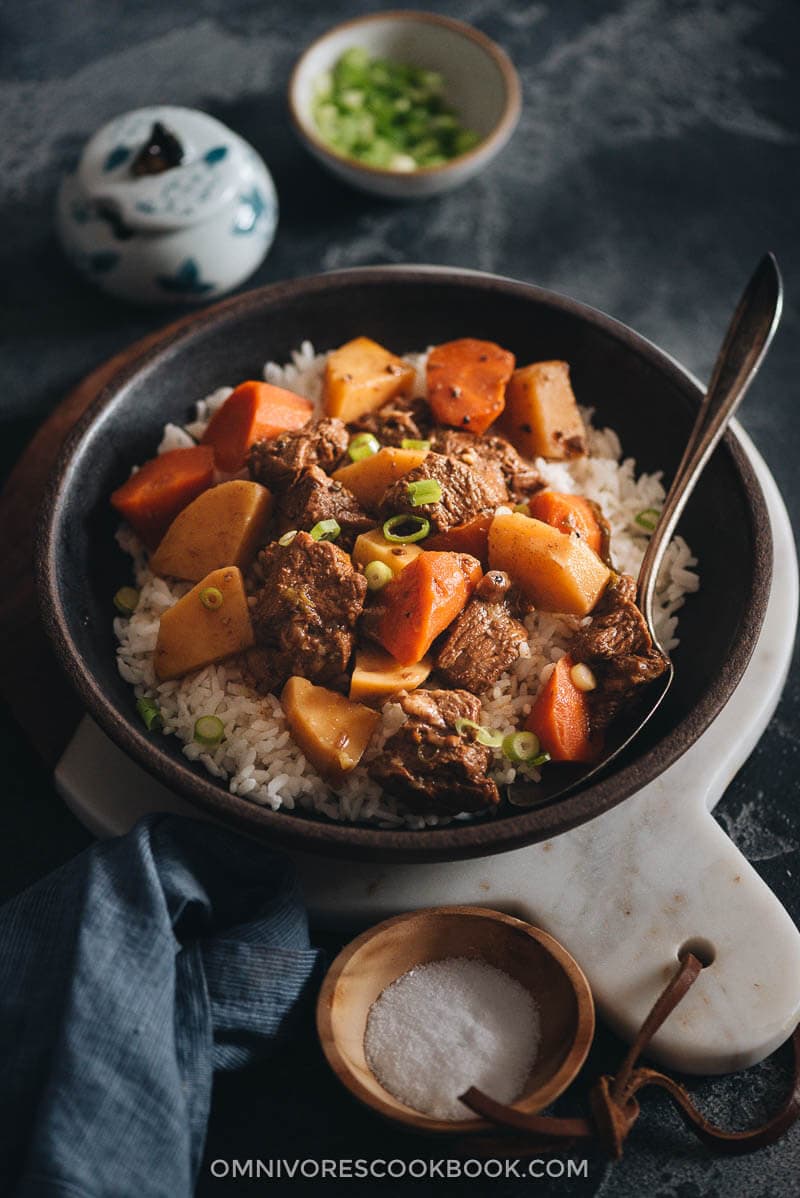 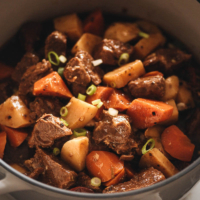 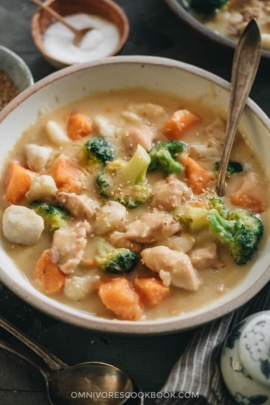 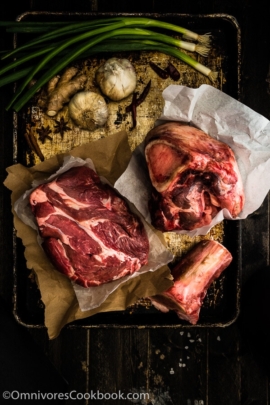 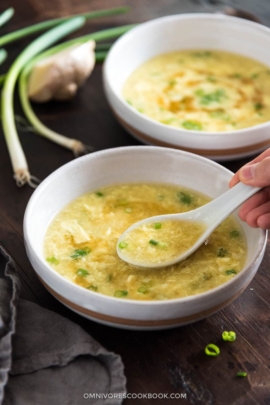 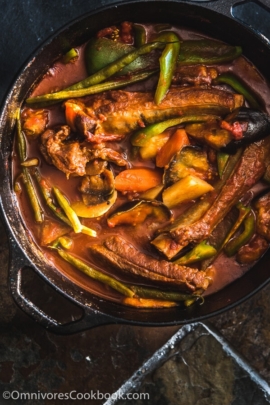