Biang Biang noodles show you the power of simplicity. With a spoonful of savory seasoned soy sauce and fresh, nutty hot sauce, the thick and meaty handmade noodles will bring you to foodgasm! 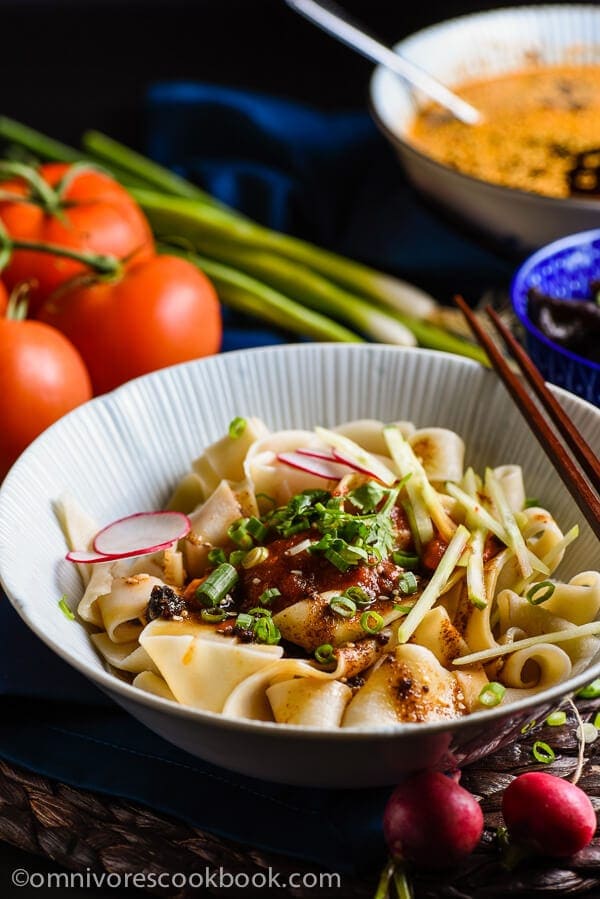 Does the name of this dish sound strange enough? Biang Biang noodles is actually a simple spicy noodle dish. The noodles are freshly made and quite wide and thick. The word “biang” is an onomatopoeia – it mimics of the sound made in the process making the noodles, when the dough is pulled and slapped against the working surface.

The dish is classified as cuisine of the poor, since it is so basic and cheap. Even in Beijing, where the average lunch usually costs 4 to 8 dollars, a big bowl of Biang Biang noodles only costs 2.

This simple noodle dish is the signature of Shaanxi, a province not well known for its food.

However, Biang Biang noodles have become quite trendy as of late. There is even a New York restaurant named after it and featuring it as the signature dish.

Wikipedia says that the reason it’s becoming trendy is that the name of the dish contains the most complicated Chinese character – it has 58 strokes. Insane, right? You can see how it looks in the picture to the right.

But if you ever try this dish, even once, you’ll learn that its popularity is due to its simplicity and great flavor. 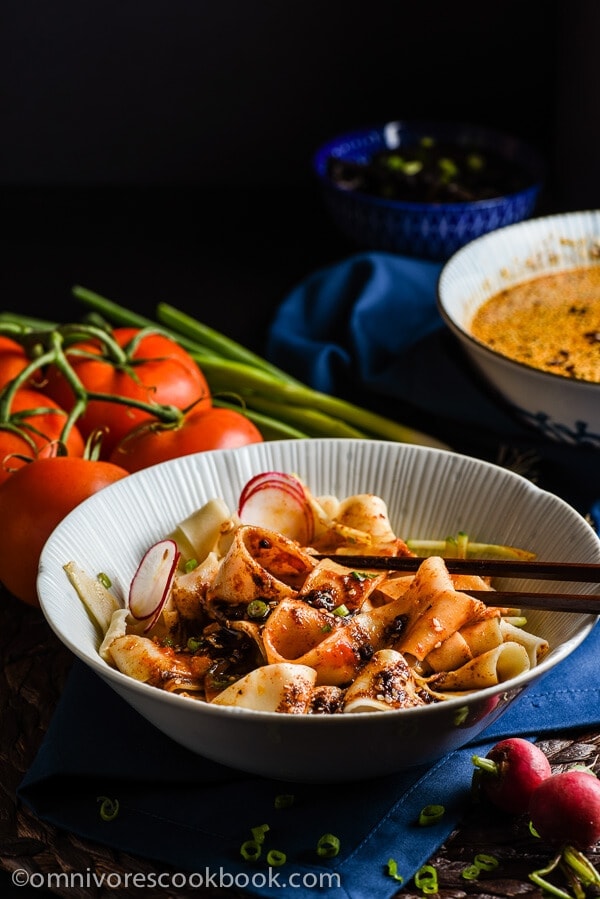 The idea of Biang Biang noodles is really simple but there are unlimited ways to serve it. The basic version of the dish uses thick and wide hand-ripped noodles, drizzled with tons of hot chili oil, chili flakes, and soy-sauce-based seasoning. For homemade versions, people add all kinds of simple toppings, such as blanched bean sprouts and simple stir-fried or raw veggies. As for the restaurant version, fancy items like chicken, beef, and lamb are often placed on top.

I had the best bowl of Biang Biang noodles when I was visiting Xi’an (the city of origin for this dish) with Thomas. It wasn’t even a famous restaurant or one one with particularly good reviews, just a random small bistro that we came across on the side of the road. The big bowl of fat noodles was topped with tomato and egg stir fry, a rich chili sauce, and extra chili flakes. It was so simple, yet also rich and satisfying. 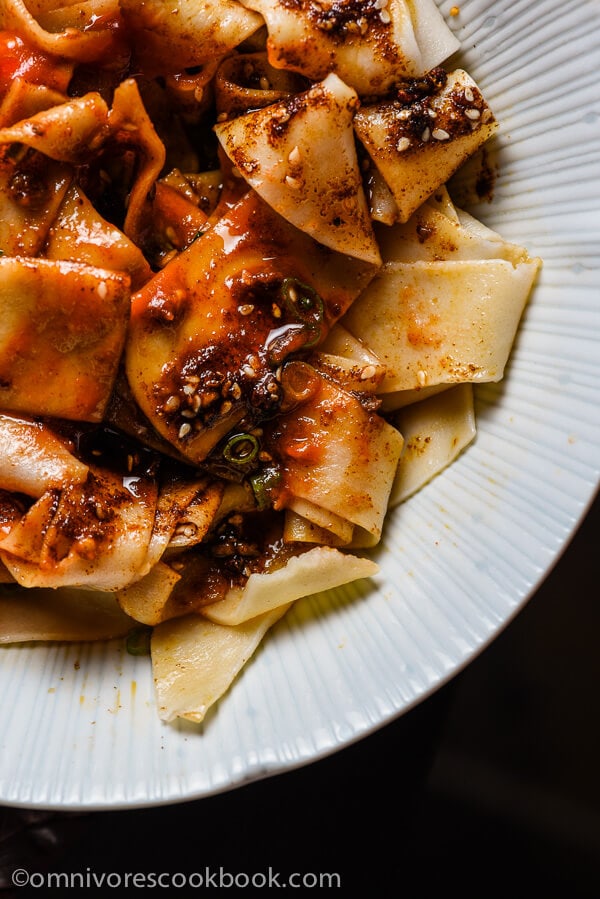 When trying to recreate the Xi’an version of these noodles at home, I tried several methods and finally found a perfect one. The chili oil and seasoned soy sauce in the recipe below were adapted from Xi’an Famous Hot Rice Ribbons by Lady and Pups. The ingredient list might look very long, but it creates the best noodle sauce ever, and you’ll fall in love with it immediately. 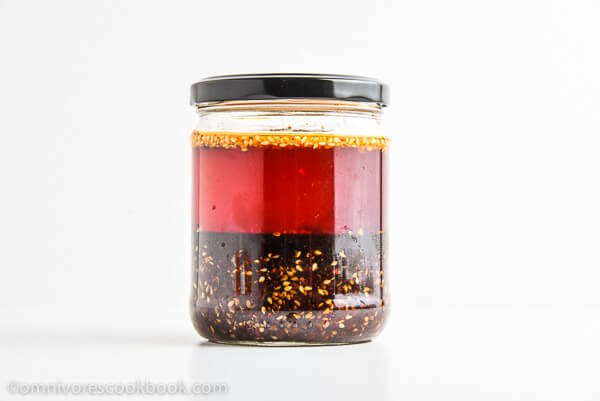 This recipe will generate more chili oil and soy sauce you’ll need for one meal (which serves 4 people). However, do make sure you follow the quantities of this recipe to create extra sauce. It’ll become a great solution for cooking quick and delicious lunches.

Option 1 – Create a new version of Biang Biang noodles with different toppings. Such as tomato egg stir-fry (classic Chinese), blanched or grilled chicken, grilled beef, or stir-fried ground chicken. You can top any of these on freshly boiled noodles and drizzle with chili oil and seasoned soy sauce.

Combine peanut butter (or Chinese sesame paste), soy sauce, and black vinegar in a small bowl. The ratio should be 1:1:1. Mix well.

You can create a noodle bowl with:

For example, I did this with the only leftovers in my fridge yesterday. I used some carrot, celery and wood ear mushrooms to make a quick stir-fry. I chopped a chicken breast and stir fried it with green onion. I seasoned it with soy sauce and salt without marinating. Then I used the formula above to combine everything together. And bam! Two big bowls of super tasty noodles were ready. Easy! 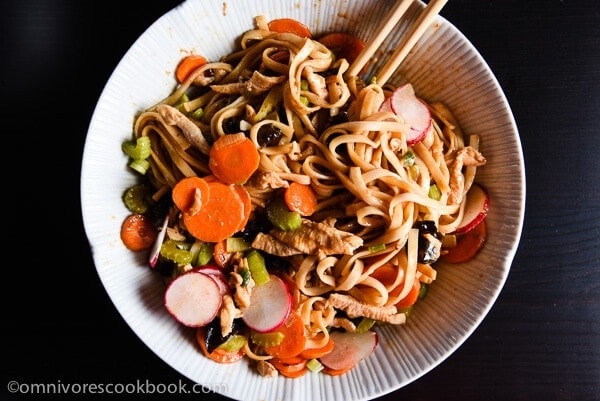 You can even simplify the process by using sliced cucumber (for a vegan dish), leftover meat, or any blanched veggies that come to mind.

Option 3 – Use the seasoned soy sauce and chili oil to create an awesome salad/side.

You can make cool things, such as red-oil chicken, with blanched chicken breast and these two sauces. Or you can drizzle them on blanched broccoli, smashed cucumber, or other veggies to create a quick side dish. 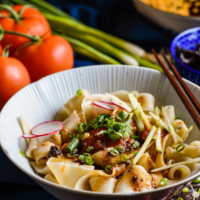 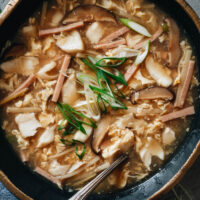 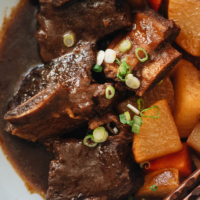 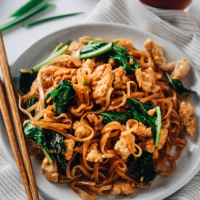 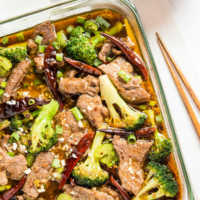