A Northern Chinese delicacy, these fried stuffed eggplants feature a juicy filling, tender eggplant, and a super crispy crust. It’s like fried dumplings, but using eggplant to replace the dough wrapper. This recipe shows you how to make the crust extra crispy so that it stays crispy for a long time, even after reheating. It is a perfect dish for dinner parties, holidays, and Chinese New Year.

Fried stuffed eggplant, or Zha Qie He, can be translated as fried eggplant pocket or fried eggplant dumplings. It was one of my favorite childhood treats. It’s a special occasion dish that my grandma made once in a while when I was growing up. My family also makes it during Chinese New Year because the stuffed eggplant looks like a golden coin and represents prosperity. Plus, it is so delicious!

To make the dish, the eggplant is sliced into thin pieces, then you stuff a meat filling in between the slices to form a “burger”. Then you dip the eggplant burger into batter and fry it until golden crispy.

Deep frying is messy and nobody likes it, I know! But this dish is really worth the effort. Plus, it’s actually quite easy to put together.

The biggest challenge in this recipe is to get the crust crunchy crispy while keeping the inside tender and juicy. Because the eggplant releases moisture during and after the cooking, the crust might be crispy when it’s fresh out of the pan but turn soggy immediately after. I’ve tried many combinations of ingredients and water ratios, and finally found the best way.

The key to making extra crunchy crispy fried stuffed eggplant is double frying. It makes a dramatic difference as compared with single frying, no matter what ingredients you use. Once doubled fried, the stuffed eggplant is super crunchy and crispy. Moreover, it stays crispy even after it cools down and turns cold, and after storing and reheating.

Double frying might sound like a lot of work. But truth to be told, you’re already doing the messy deep frying. So the extra step is actually not that much more work.

How to prepare fried stuffed eggplant

Preparing fried stuffed eggplant is relatively simple and the most time-consuming part is the frying.

To prepare the filling, make sure to mix the ingredients into the ground meat thoroughly. You should stir the filling long enough that it becomes stringy. The filling will stay together better and be easier to work with without falling apart.

Cutting the eggplant for this dish requires a little bit of knife skill. Basically, you want to create a pocket using two thin eggplant pieces with a small part attached, so it holds together well during frying. The best way to do it is to first slice the eggplant without cutting all the way through; then slice again, but this time cut all the way through.

Once you’ve prepared the filing and the eggplants, stuff them to form eggplant burgers. Use your chopsticks to stuff a small ball of filling between the eggplant pieces and make sure to push all the way through. Then squeeze the two pieces together to even out the filling.

NOTE: It’s important to not over stuff the eggplant. I found it’s best to keep the filling as thick as the eggplant, for a better texture and taste. Over stuffing the eggplant can also cause undercooking later on.

When you’re ready to cook, heat the oil while making the batter. The batter should be runny but thick enough to cling onto the eggplant.

Then you can dip the eggplant burgers into the batter and fry them as you go.

The eggplant will turn pale golden after the first fry, then golden brown and crispy after the second fry.

If you don’t have a thermometer to measure the oil temperature, it’s no big deal. You can adjust it by observing the eggplant.

How to serve fried stuffed eggplant

Make sure to let the freshly cooked fried stuffed eggplant cool on a rack for a few minutes before serving. The filling will be steaming hot! After a few minutes, the crust will crisp up a bit more and it will taste SO GOOD!

The northern Chinese style fried stuffed eggplant is flavorful enough to enjoy by itself. However, I do prefer to serve some dipping sauce on the side, such as mayonnaise, ketchup, or chili garlic sauce. You can also mix some salt and white pepper (1:1 ratio) for a pepper salt for dipping.

Serve with a stir fry sauce

Sometimes the fried stuffed eggplant is served with a stir fry sauce in restaurants. I didn’t include that method in the recipe because I prefer to serve the crispy eggplant by itself. The stir fry sauce is a nice touch, but the eggplant will turn soggy really quick once you pour the sauce on.

If you still prefer a homemade sauce, try out:

All of these sauces go perfectly with these fried stuffed eggplants.

If you decide to make the sauce, pour the sauce onto the eggplant right before you serve them or serve the sauce on the side, to maximize the crispy texture.

The beauty of this fried stuffed eggplant recipe is that the eggplant will remain crispy and juicy even after reheating.

I have tested refrigerating and freezing the eggplant, then reheating it in an air fryer. Both worked out nicely. You can see the detailed information in the recipe below.

If you do not have an air fryer, oven reheating works as well. Definitely turn on the convection function if your oven has it.

Fried stuffed eggplant is such a fun dish and it tastes so good. For me it’s a special occasion food because it does take some time to cook, and the cleanup is not much fun. The dish is perfect for your dinner party or celebrating Chinese New Year because the eggplant “burgers” hold up so well and stay crispy for a long time. You can warm them up in the oven if you prepare them ahead of time.

I think it’s quite magical that you only need some eggplant, a small amount of meat, and some flour to make a big batch of food that everyone will love 🙂 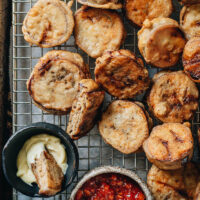 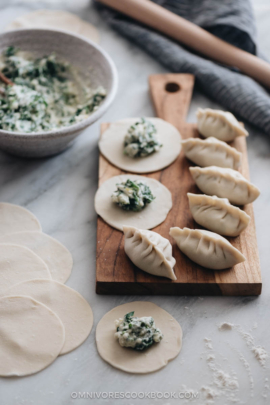 Nepali Momos with Spinach and Ricotta 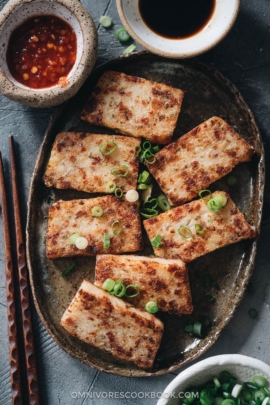 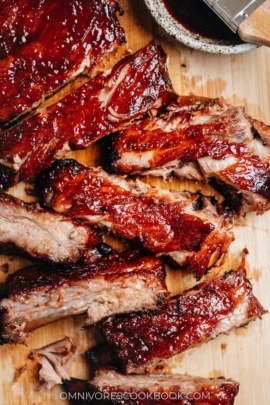 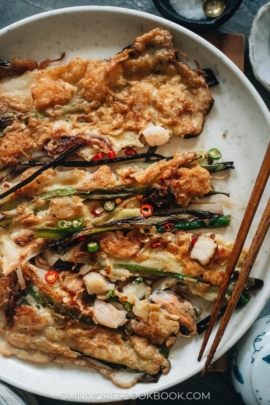