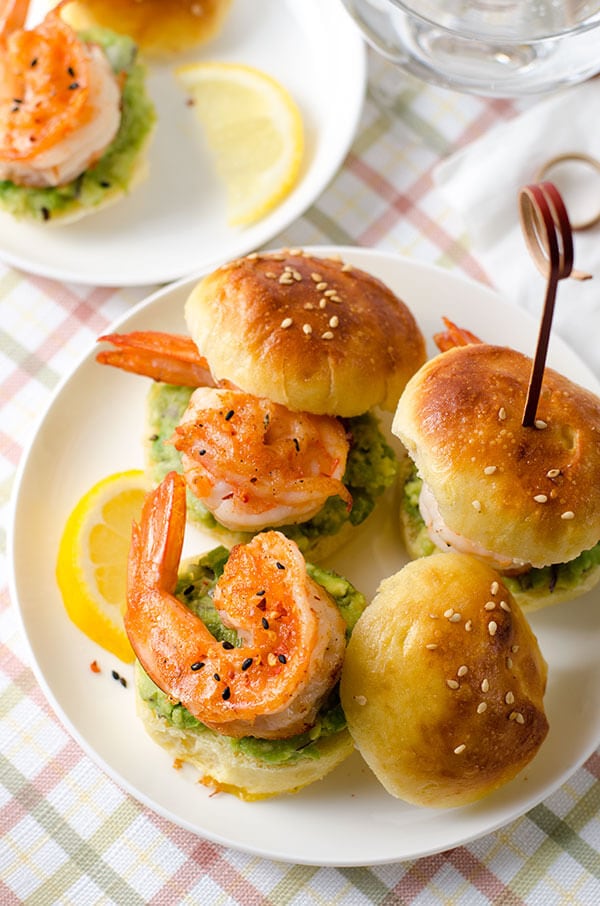 The shrimp is marinated in Japanese sake and grilled until crispy. Its sweet aroma and the fragrance of rice wine goes perfectly with the creamy guacamole, warm or cold. The mini burger buns make this delicious combo even fancier!

The combination of shrimp and guacamole never goes wrong. If you’ve been following my blog, you might have read my epic fail post. I worked very hard in the kitchen for six hours one evening, but the result was disastrous. What you may not know is what I usually eat after a major failure in the kitchen. Normally, I will just feel super gloomy and order pizza or KFC, and become more depressed. That day, I made these cute mini sandwiches for a change, which really brightened my mood.

Luckily I had some freshly made mini burger buns, so I decided to use them out of convenience. For a guac salad, I always like the classic Asian combination – guac, shrimp and mayo. But then, I decided to do something different. Since the burger buns were very tiny, a salad with cubed ingredients wouldn’t stay very well between the buns. So, I smashed the avocados to make a guac, and topped it with some whole shrimp. 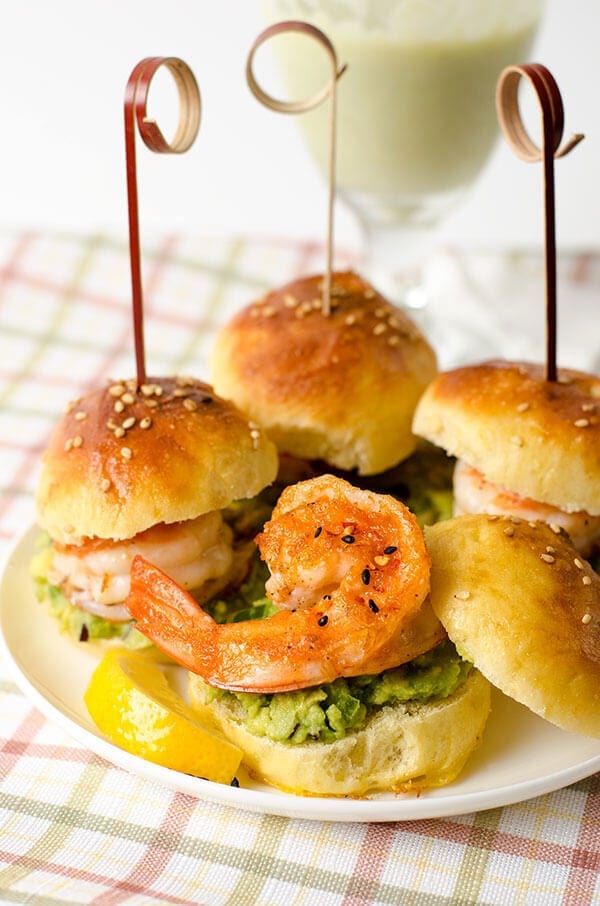 Shrimp and avocado sandwich is an actual dish on the menu of Japanese Subway restaurants. Similar to the idea of seafood pizza at Pizza Hut, American fast food chains have adapted to local habits and usually serve seafood in Asian countries.

Avocados have started to gain popularity in China lately. Back in 2008, I had no idea what an avocado was and had never seen one. When I was getting my take-out lunch in Japan, I “accidentally” ordered the guac shrimp sandwich.

The best thing in Japan is that they label calories on every food package and fast food menu. A shrimp guac sandwich with less than 400 calories was evidently very attractive to someone on a diet and counting the calories of every meal.

I even chose lemon juice as my “sauce”, instead of mayo. Turned out it was one of the best sandwiches I ever got from a Subway! It was a very light meal, but had a delicate taste. The guac went perfectly with shrimp. Creamy and fulfilling. 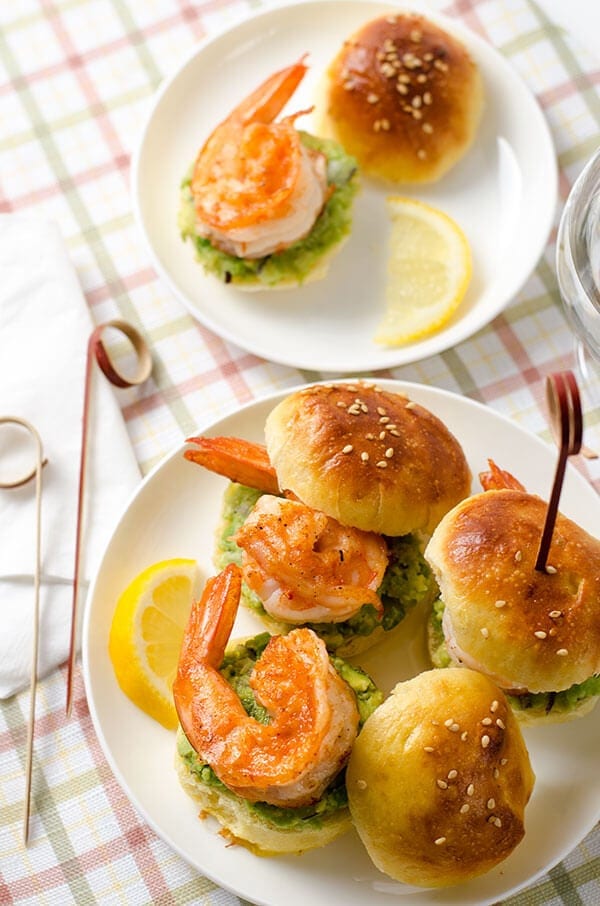 Sadly, the fancy avocado shrimp sandwich isn’t served in Chinese Subway restaurants, so I had to put one together myself!

I made a very basic guac. Then I made a tiny twist by using the Asian method of grilling the shrimp instead of boiling them. I’d say it changed everything! The shrimp tasted slightly sweet and very aromatic after marinating in the Japanese sake. It’s a trick I also tried when I making this wonderful grilled chicken.

If you’ve never marinated poultry or seafood with sake, you really should try it out. Then the only other things you need are salt and pepper. The marinade won’t hide the character of the original ingredient, only bring out its great taste. I used a cornstarch slurry to coat the shrimp, so they will be tender and juicy after grilling, without turning try. It’s a common trick in Chinese cooking and it works like a charm.

Within 20 minutes, you’ll get these cute little sandwiches that taste like heaven, especially if you’ve had a long hard day!

These sandwiches are great for lunch, dinner or served as a party appetizer. They hold their shape well, taste great whether warm or cold, and require so little time to prepare. You won’t need me to tell you what to bring to your next gathering to impress everyone! 😉 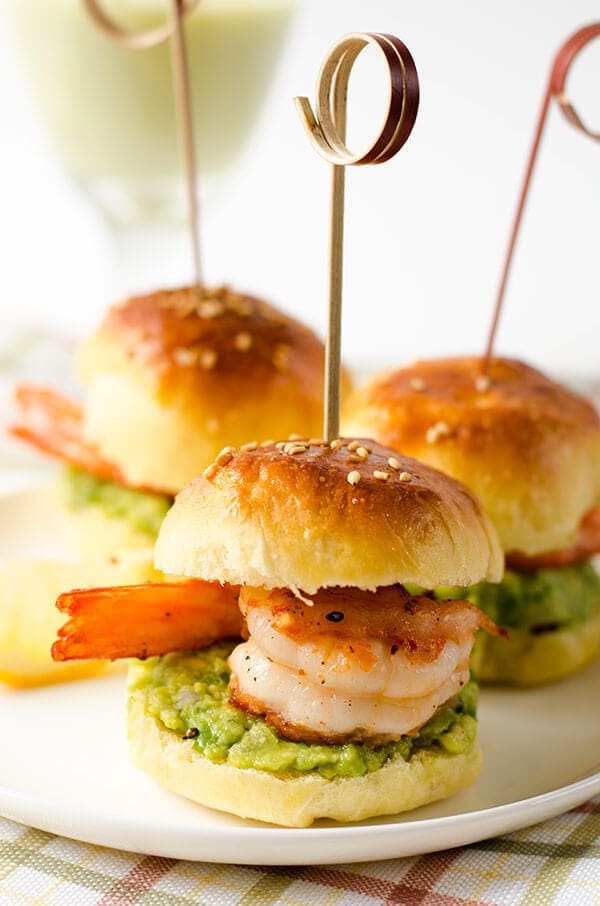 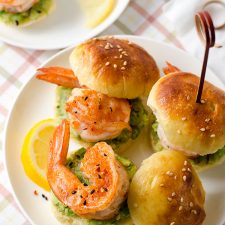 The nutrition facts are calculated based one 1 of the 20 sandwiches generated by this recipe. 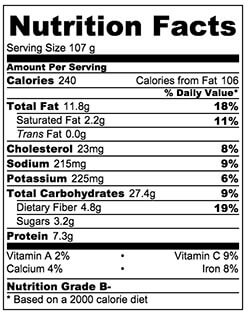