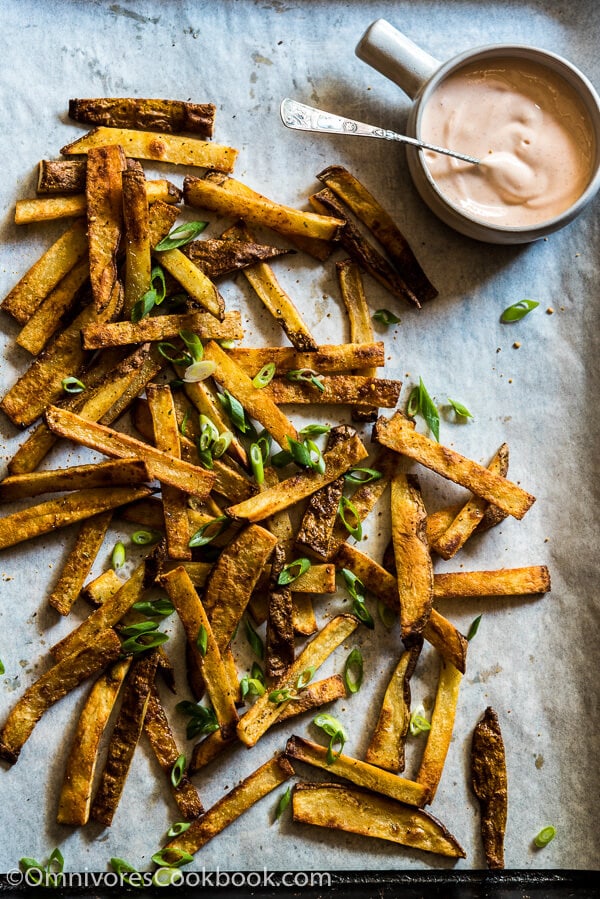 These french fries are baked until crunchy and crispy. They are served with a creamy and healthy honey sriracha sauce. Only 218 calories per serving. Now you can enjoy french fries guilt-free!

Since moving to Austin, I have been learning new cooking techniques in my American kitchen. Baking vegetables is one of them. This might sound absurd to you. But I thought baking was super intimidating. I’d rather break down a whole chicken for a stir fry than throw some wings into the oven. I bought a winter squash three months ago and it’s still on my kitchen counter now, because I don’t know how to roast it.

It made me realize that calling some of my Chinese recipes “easy” is not really fair to you, my dear readers. Although I can make fried rice with my eyes closed, it does not necessarily mean it’s easy. It’s easy to me because I’ve done it a thousand times.

Now that I have a big oven that can go up to 550F (my Chinese oven was quite tiny and only went up to 400 F), sweet! Now it’s time to practice baking. 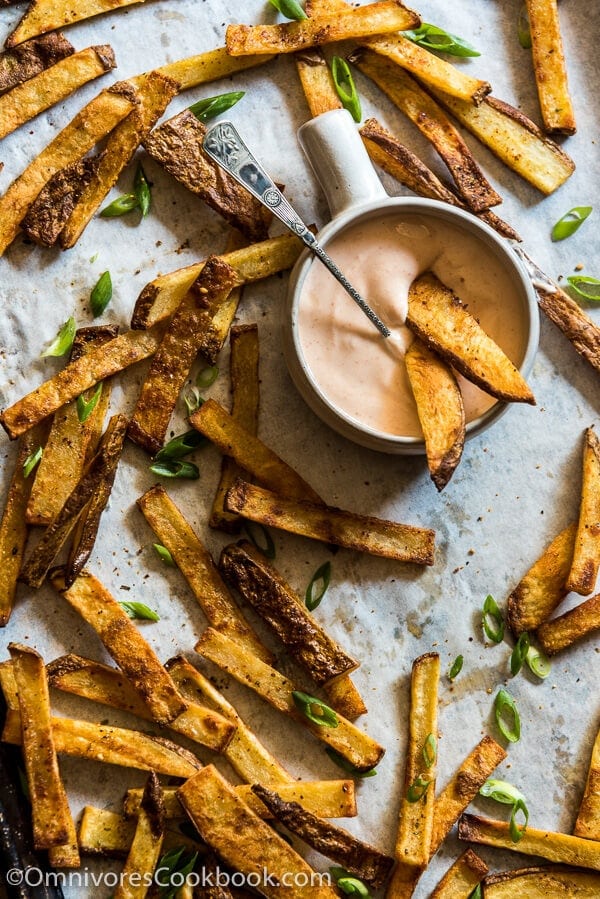 A few months later, I delightfully discovered I could crisp up almost any veggie very easily in the oven. I was hooked.

Since then I’ve been roasting green beans and eggplant much more often than stir-frying for dinner. Thomas joked that I got Americanized too quickly!

Back in China, we do cook with potatoes, and quite a lot. We either braise them, boil them, or stir fry them. They taste good, but I’ve never been crazy about them. Except the mashed potatoes with gravy from KFC, anyway 😉

Then I tried roasting potatoes. I was amazed at how they could be as crispy as fried ones. Even better, these baked fries got a crunchy texture because the potatoes lost some moisture during baking. Now, I’ve started serving roast potatoes as the staple with dinner, instead of steamed rice.

If you love extra crispy fries, like me, try the cutting method in the recipe below. I cut it into a wide strip that’s pretty thin. This way, the fries will crisp up even more. 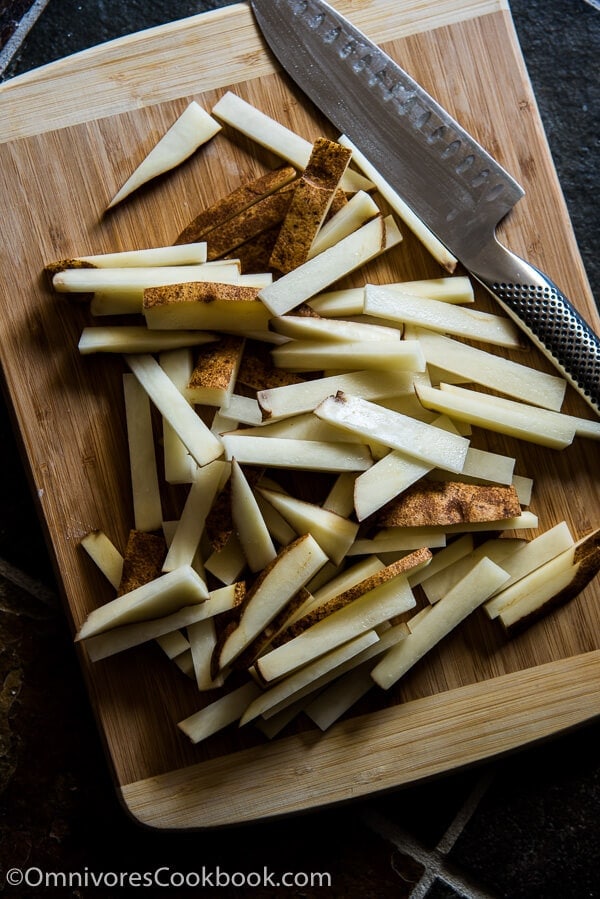 The other thing I learned after moving to the US is that there can never be too much sauce. It’s a new mentality that I’m still trying to pick up.

It’s not exactly something I want to brag about, but once I started adding mayonnaise onto everything, it was difficult to stop. After a month, I was forced to stop. My mom has been nagging from the opposite side of the earth me that my face has gotten too round.

That’s why I started exploring other possibilities to make healthier sauces. Luckily, it took about 3 seconds to figure that out.

Thanks to Thomas, we always keep a three-pound tub of Greek yogurt at home. I made this healthier version of honey Sriracha dipping sauce with it, instead of mayo. It contains four ingredients – Greek yogurt, Sriracha, soy sauce, and a spoonful of honey. I promise, it tastes as addictive as Sriracha mayo, even though it uses non-fat Greek yogurt.

A cup of Sriracha mayo contains 1500 calories. This one only contains 233 cal per cup. Isn’t it amazing? I wouldn’t mind drinking it! 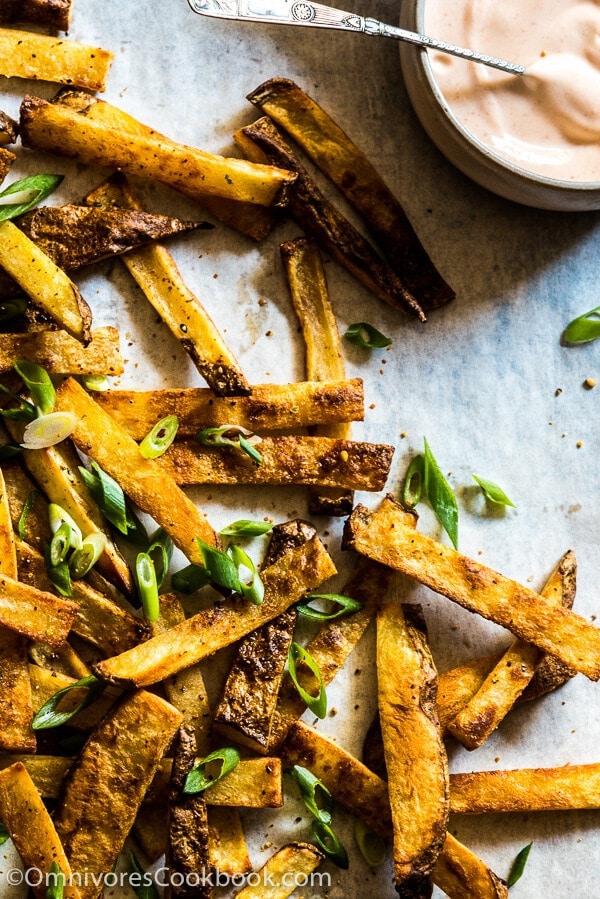 Don’t forget to grab a jar of Shichimi Togarashi – Japanese red pepper mix. Shichi means seven in Japanese. Like its name suggests, the spice mix contains seven ingredients, including chili pepper, sesame seeds, roasted seaweed, and ginger. It will spice up your french fries a bit and add a nice umami. This way, you won’t need to add tons of salt to your fries. 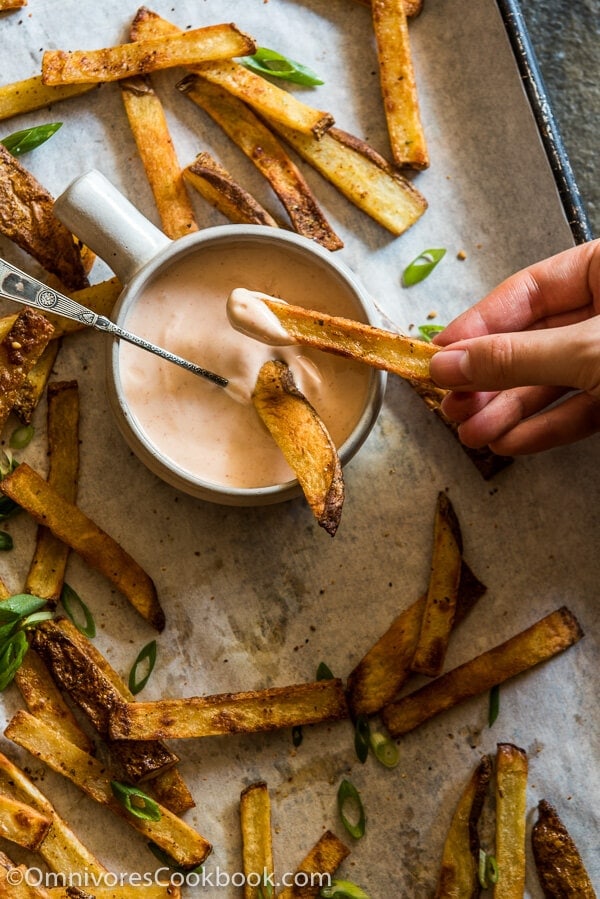 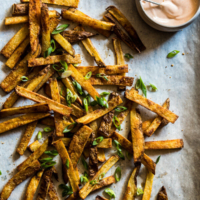 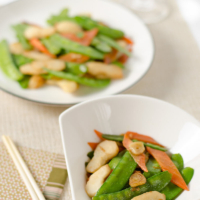 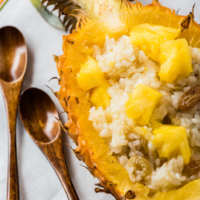 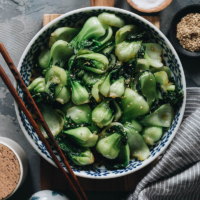 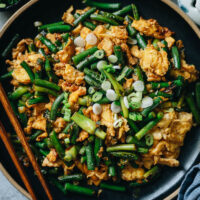